It’s been a couple months since Apple released its new operating system Mac OS X Leopard, and that’s more than enough time to give it a nice once over. (See our introduction to Leopard and some of our favorite Leopard features.) The first thing you’ll notice is the new look. Not just the new dock or the new login screen, but also the folders and the crisper, sleeker look of icons and folders. We think it’s safe to say Apple junkies were expecting something pretty, because if there’s one thing Apple is known for, it’s their impressive design. Once you can get past the pretty, shiny things, you start to notice some amazing functionality. 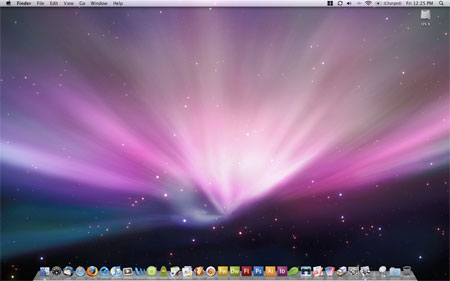 We want to outline some of the more significant upgrades and 10 things you’ll love about Leopard. The following items will be in no particular order simply because people use their computers for different reasons and our number 1 might be your number 10. That said, let’s look at some of the fun new features.

We mentioned the dock a bit earlier simply because it’s worth mentioning. You’ll immediately notice that the dock is laid out differently in the sense that it’s now more “3D” as the icons are laid out on plane rather than a backdrop. Oh, and did we mention that it’s reflective?

Once you’re done minimizing and maximizing windows to see the cool effects, you’ll notice that the dock has some new functions. After your initial startup you’ll have new icons for Spaces, Time Machine, Systems Preferences, as well as a Downloads folder icon. We’ll cover most of these later on, but let’s look at the Downloads folder next.

This feature kind of broadsides you, because you don’t need it until you actually download something. Forget the days where your desktop would be cluttered with PDFs, PSDs, and DMGs. Any download you start will automatically go straight into your download folder, so no more forgetting whether you chose Desktop, Pictures, or some other location to save your file.

You’ll know exactly where your download went, and you’ll know exactly where to go to get it. Doesn’t sound like an entirely innovative idea, we know, but trust us: After a few downloads you’ll start to love it. Now, let’s say you’ve been downloading pictures of your favorite actor or actress for your side project as an “entertainment blogger” and you want to find a specific picture from the downloads folder. Bring on Stacks!

Stacks are folders you can place in your dock for items you need to quickly access. Downloads is a Stack that comes pre-installed with your new Leopard Dock. The name “Stacks” doesn’t make sense until you see how it works. Click on the Downloads folder and you get a stack of the pictures, folders, and anything else you’ve downloaded. 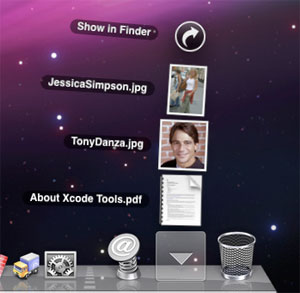 The items in that stack will fan out and allow you to see what’s in that specific folder. You can change the preferences to have your items displayed in a grid if you don’t like the fan feature. Whether you use fan or grid is irrelevant. The main point is that you have all of your folder items right there in front of you, but more importantly out of your way. See, isn’t it nice to have a nice clean desktop? We think so too, and so do second and third grade teachers all over world.

Spaces is useful for the serious multi-taskers out there. Let’s say you’re a super hero and you’re designing new outfits while you’re checking on stats in your fantasy football league. (What? Super heroes don’t like fantasy sports?) Spaces can accommodate! You can arrange different Spaces for different things and even assign a specific Space to specific programs. 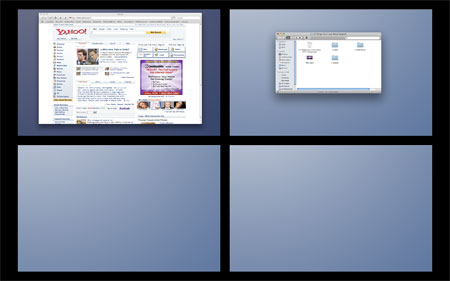 You can also add more columns and rows and have up to 16 different Spaces! With 16 Spaces you can certainly get all your super hero work done. Seriously, though: If you’re wearing lycra spandex you’ve got other things to worry about.

It’s happened to all of us – you’re using your computer and you accidentally delete something. Something important: Documents from your childhood, your project due in 5 hours, or maybe even your pictures of Jessica Simpson for your entertainment blog. You’re in trouble, right? Nope, because you had the good sense to set up Time Machine, which backs up all of your files automatically to a storage device. 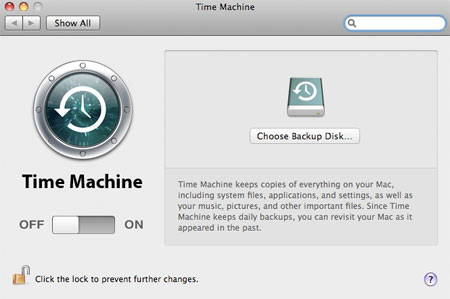 Simply click on the Time Machine icon and it allows you to scroll back and forth through your Mac’s history and choose a time period that would restore your Mac and restore the data you just lost. Time and time again you’ve been told backing up your files is important, necessary, and a lifesaver. It’s all true. And now it’s also easy - so easy that after you set it up you won’t even know you’re doing it. 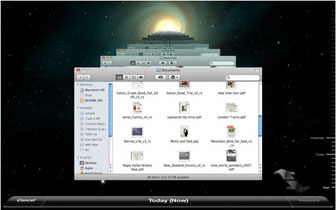 Intel-Mac users were very excited to hear that Apple would make Boot Camp available to the public – something that allowed all Intel-based Macs to use Windows. Now Boot Camp is built into Leopard and is no longer a secondary install. If you’ve never used Boot Camp, the setup assistant will guide you through your setup process. Simply grab a copy of Windows and run the setup process. 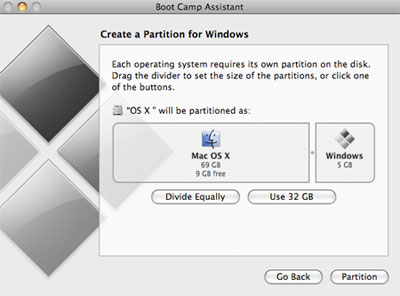 So now when you need to use a Windows program, for whatever the reason, Boot Camp makes it increasingly simple to do so. As the Apple website says, “Leopard is the world’s most advanced operating system. So advanced, it even lets you run Windows…”

Have some little Mac users in your home? Want to make sure they’re safely using the family computer? You can manage your child’s usage in a number of ways while monitoring their use. You can limit the applications they use, content they view on the web, limit mail and iChat usage, place time limits on when and how long they use the computer, and view logs of websites visited, applications used, and what they did on iChat. It’s all available in your Mac’s System Preferences. 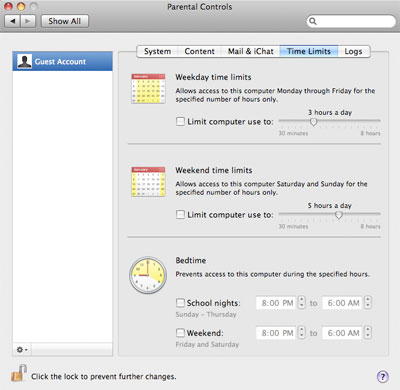 In a world of uncertainty, it’s good to know you can be certain your child is safe when they’re on the computer.

Another improvement to an already useful feature can be found in Finder. You will immediately notice the new sidebar and how items are grouped. The most useful groups are the Today, Yesterday, Past Week, All Movies, All Images and All Documents groups. Yup, they’re all exactly what they say they are. 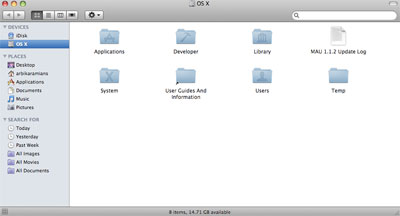 Cover Flow looks as good as it is useful. Never before have you been able to visually arrange your files and folders. It’s always been grids or lists of files and folders and frankly, it’s just boring. 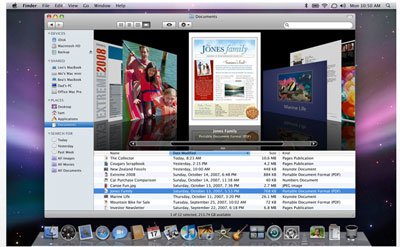 Let’s say you’re looking for a specific picture of Tony Danza for your blog: You shouldn’t have to click on each picture one by one to view them all. In cover flow just hit the arrows right or left or drag the bar and you scroll through pictures with ease. In my opinion, Tony Danza has never looked better.

We’re leaving the last item up for grabs. The reason? Apple released Leopard with 300 new features and to choose just 10 to discuss is somewhat silly. So number 10 is up to you. We’ve simply outlined 9 features which are the most notable upgrades in the new version of OS X - so go ahead and take off that Super Hero cape and put down the People Magazine you’re using for blog research and take a look around your Mac and find whichever feature you’d consider to be number 10!