How to Connect Multiple Monitors to Your Mac

Everyone knows that Apple’s Displays are cool - really friggin’ cool - but the high price tags are not. What’s a poor nerd to do? Buy a second display and connect it to your Mac. It’s one of the easiest ways to trick out your Mac! 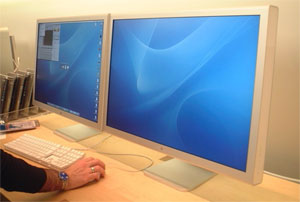 Working with multiple monitors gives you more visual real estate. You’ll really notice the difference when working on documents in multiple applications, and you’ll have an advantage when playing certain games. Best of all, it’s not as expensive as you think! Even if you don’t happen to have an old monitor sitting around, you can usually pick one up on the cheap at most stores that sell computer products. And many fine monitors can be had for even less if found at a thrift store.

The only things you’ll need are the monitor itself, either a modern LCD flat screen or an older, bulky CRT monitor; a video card with a connector that matches the connector on the extra monitor; and an extra outlet on your power strip for the monitor. If you have a desktop Mac, and you want to add another video card, you’ll also need an open PCI slot.

Using multiple monitors means that you won’t have larger windows overlapping smaller ones, and there won’t be any need to decrease the size of larger windows to accommodate for smaller ones (although pressing the function key “F9” in Mac OS X Tiger will temporarily decrease the size of all open windows to give you a preview of the open windows). Unfortunately, the extra monitor will take up space in your physical workspace, especially if you’re using a CRT monitor, and the bigger electrical bill will shrink your wallet.

Does This Work With My Mac?

Not every Mac supports multiple monitors. The Mac mini doesn’t allow you to connect a second monitor, and the older iBook G4 only allows you to mirror displays (more on this in a minute). Creating a comprehensive list of Macs that support multiple monitors is beyond the scope of this article. However, you’ll find a wealth of information on the Internet, and websites such as EveryMac can tell you whether your Mac supports more than one display.

Most Macs will work fine with multiple monitors. However, in some cases, you’ll be able to connect more than one display to your Mac, but Mac OS X will only allow you to “mirror” the displays (that is, display one desktop on both monitors). Depending on your Mac, you might be able to hack Mac OS X with Screen Spanning Doctor. This software modifies your version of Mac OS X to work with multiple displays. (See this Macworld article for more information.)

Before you purchase a second display, you should check the connector on your Mac. This is probably the most confusing part of connecting two displays! If you have a relatively new Mac, chances are good you have at least one of these connectors:

One Man’s Mission: Multiple Displays on a Power Mac G4

Obviously, it’s impossible to discuss adding a second monitor to every Mac out there. We had to pick just one Mac for this article: a Power Mac G4. What follows is our experience with this older Mac model, but the process should be similar no matter what Mac you currently have.

When writing this article, I wondered what should come first: a monitor or the connector. Should your video card determine what type of monitor you buy? Should your monitor determine what type of video card you buy? Or should the application dictate which video card and monitor you use? If you’ve already got a CRT monitor lying around, any old PCI card should work. I want to emphasize the word “should,” because this tip works in both Mac OS 9 and OS X, but certain video cards may not work properly in OS X and newer cards may not work in OS 9. The types of connectors on the monitors are also important when picking a video card.

The top card is a Radeon 7000 by ATI. It has 32 MB of video memory and fits in a PCI (Peripheral Component Interconnect) slot. From left to right you can see an S-Video connector, which allows video to be outputted to televisions with an S-video input; a DVI port which allows an LCD monitor to be used, and a VGA port which allows CRT and some LCD monitors to be used as well. The card on the bottom is a GeForce2 MX by nVidia. This also has 32 MB of video memory but fits in an Advanced Graphics Processor (AGP) slot. From left to right is a VGA port, similar to that on the ATI card; and what’s known as an Apple Display Connector. It looks similar to a a DVI port but has rounded corners. This port also carries power and USB data, but can only be used with slightly older Apple monitors, both CRT and LCD, that have this port. Most video cards nowadays have both a VGA port and DVI port, allowing customers to use modern video technology and tried-and-true classic monitors. If you will be using an older Apple monitor that looks like a wider version of the VGA port, you should be able to get an adapter easily that allows you to connect your older Apple monitor to a VGA port. 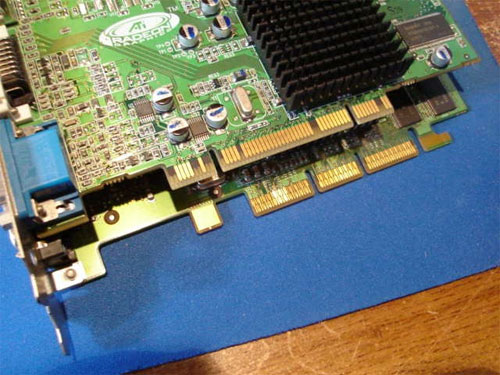 Here’s an overhead shot of both cards with the top card moved up a bit. This shows the difference in the layout of both the PCI and AGP cards. Some Macs have a single AGP slot – newer ones have a PCI-Express slot. If you’re currently using a PCI video card and have an empty AGP slot, your best bet is to purchase an AGP video card and use that for your main monitor. Otherwise, you can simply purchase a PCI video card and use it with whatever Mac you have. Some cards, such as the Radeon 7000, are made for both Macs and PCs, but you have to be sure that you’re purchasing the correct card for your platform. Some cards made for PCs can be “flashed,” or have their firmware changed so they can work with Macs, but I have not done enough research on this to encourage their use. 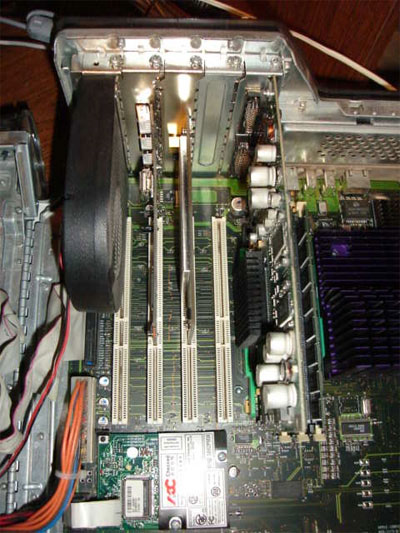 This photograph shows a top-down view of my Mac. From left to right is a fan that takes up a space on the back panel but doesn’t plug into a PCI slot, a Sonnet 5-port USB 2.0 card, my trusty Motorola WPCI810G wireless card, an empty PCI slot, and an ATI Radeon 9000 graphics card in the AGP slot. The way to distinguish the AGP slot from others is the shorter green bracket, which is in contrast to the longer, vanilla-colored PCI slots.

The video card I’m using for this demonstration is the Radeon 7000. I’ll be hooking it up to a Radius S1 15-inch CRT monitor. The Radeon 7000 has a VGA port – which matches the Radius S1’s connector. My primary monitor is a Samsung SyncMaster 930B 19-inch LCD that works perfectly with my Radeon 9000. The cool thing about this monitor is that it has both a standard VGA port and a DVI port. The monitor came with a VGA cable, but I had to pay around $20 for a DVI cable on ebay. I’m not sure if the DVI cables are always sold separately when purchasing an LCD monitor, but I want to make potential buyers aware of this.

How to Connect Multiple Monitors to Your Mac