How to Upgrade Your MacBook Pro's RAM

Upgrading the RAM is one of the cheapest and most effective ways to boost your computer’s overall performance. RAM, or random access memory, stores the code and instructions for OS X and any applications open on your Mac. Installing larger RAM modules in your MacBook Pro will allow you have more applications open at once and perform more tasks simultaneously. For example, you could open a bunch of memory-hogging applications while ripping a CD, watching a DVD, and uploading photos to the Internet - all at the same time. And if you install more RAM in an older MacBook Pro, you could see a big difference in the way your computer performs everyday tasks, like loading websites.

How to Find New RAM

RAM modules come in pairs. For example, the 2012 MacBook Pros come with 4 GB, which is really a set of two 2GB RAM modules. To upgrade the RAM, you need to purchase a pair of larger modules, like two 4GB modules for a total of 8GB of RAM. We recommend this Crucial 8GB Kit (4GBx2), 204-pin SODIMM, DDR3 PC3-10600 Memory Module Set (currently $45) as shown below. 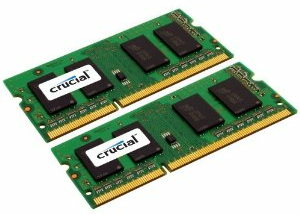 Of course, there are other sizes and brands of RAM available for your MacBook Pro. Use Amazon’s website to find the best deal on RAM modules.

Taking a Peek Under the Hood

Your MacBook Pro has lots of internal components hidden under the case, as shown in the image below. You don’t want to touch most of these components—doing so could harm your Mac. When replacing your RAM modules, follow the instructions carefully and try not to touch any of the other components. 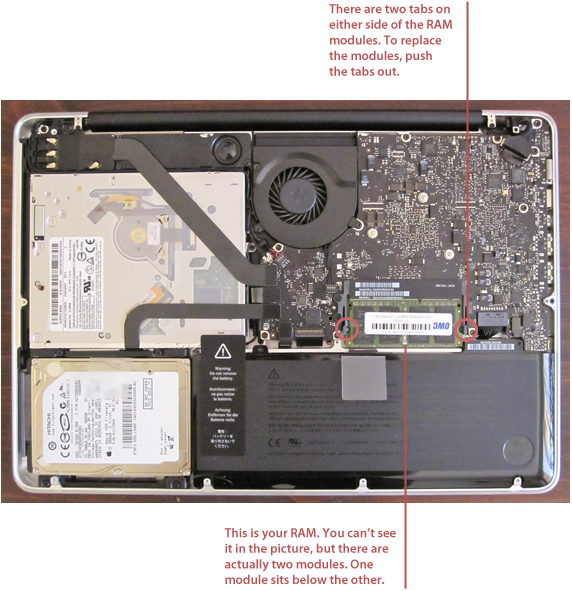 It’s worth noting that the placement of components varies from Mac to Mac. Apple made the RAM and hard drive accessible in most models, but some Macs - like the Mac Mini - are notoriously difficult to upgrade. Fortunately, the MacBook Pro has RAM modules and a hard drive that are easy to replace.

Upgrading the RAM in Your MacBook Pro

Once your new RAM modules arrive, set aside about half an hour to perform the replacement. Be mindful of your environment. Static electricity discharges can zap components, so a fleece pullover isn’t the smartest thing to wear. Try to find a flat, clean surface to work on. And keep pets and children out of the way - you don’t want any hairballs or spilled drinks in your MacBook’s innards.

Here’s how to upgrade your MacBook Pro’s RAM:

That’s it! Reconnect the power cord and start your Mac—you can check that the RAM is working by selecting About This Mac from the Apple menu.