Now that most of the initial furor has died down, I think it’s time to write an article about the AppleTV. Why an article now – on a device released months ago and overanalyzed by both press and users alike? I believe that I and others who have had the AppleTV for a while now have enough experience with it to properly review it. 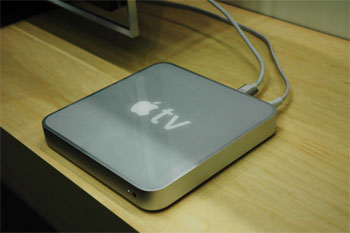 Before I go into the review, let me tell you what led me to purchase the AppleTV. For the past few years, I have recorded TV onto my Mac with a Formac Studio DV – a great little device for both capturing video as a pure DV stream and playing/recording TV. Since I, like many others, have a busy schedule, I mostly used it for watching recorded TV on my Mac – using it in place of a Tivo-like device. Having an Apple 20-inch Studio display, this worked out great until my wife asked me one night, “When are we going to be able to watch TV on the TV again?” This question really started the wheels turning.

I knew that Elgato had some great devices for playing your multimedia content on a TV, but I had also heard through the rumor mill that Apple was working on their own device. On September 12th, 2006, Apple announced the AppleTV. Being the giddy Apple fanboy with more dollars then sense (or so I have been accused), I ordered one immediately when the online Apple Store opened after the keynote. It was only $299.00 – a small price to pay for such Apple-y goodness. Or so I thought.

The release date was delayed a bit, but that was OK. That gave me time to do a bit more research into the requirements of the device. The first thing I found out is that it would not work with my existing standard definition TV. This was a problem, but not an insurmountable one. All I had to do was convince my wife that we needed a new TV. “But we just bought a new TV!” she cried. “Yes, ten years ago” I replied. The battle raged, but I finally won her over. All it took was the promise that she could buy a new entertainment center for the new TV – a fair trade, I suppose. Of course, since it was a high definition TV, it would also require a high definition antenna, and all of the cabling, signal amplifiers etc. that it required. Sigh. So, my original pittance of a $299.00 investment turned into over $5,000.00 – all so we could watch TV on the TV again. Isn’t life in today’s high-technology world fun?

Using AppleTV in the Wild

Now that I have had the AppleTV in my house for a few months, I feel that I know its good and bad points pretty well. My kids and I have definitely put it through its paces and it has performed flawlessly. In fact, one of the most negative things I can say about the whole experience has nothing to do with the AppleTV, but about my couch. I have been spending so much more time watching TV and movies lately that I’ve realized my couch really isn’t that comfortable.

First, let’s cover the good points. Number one would have to be the interface. Apple has done their usual superb job on the AppleTV’s main and sub-menus. When the AppleTV was announced, many wondered how a device like this could function with a remote that only had six buttons. As anyone who has had an iPod could tell you, it works and it works well. The main menu is divided into five sections – Movies, TV, Music, Podcasts, Photos, Settings and Sources, as seen in the picture below: 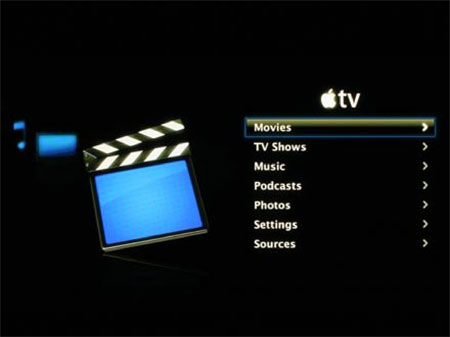 Each main section is divided into sub-sections. For instance, under the Movies section are movie suggestions from iTunes, movie trailers, and movies you’ve purchased through iTunes, as seen in the picture below: 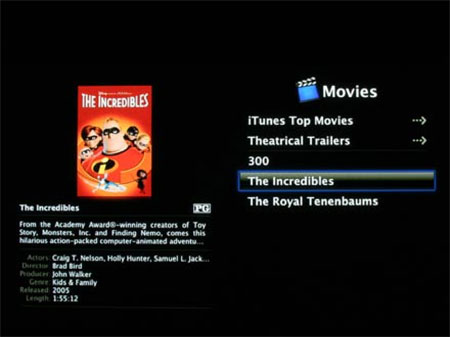 Each purchased movie has a picture of the box art and a description of the movie, cast, etc. but no special features, directors cuts, subtitles and the like. Purchased movies are of decent quality – though some videophiles may object. Yes, there is artifacting in some of the fast-paced scenes, but speaking as Joe Consumer, it looks fine to me on a 50” plasma HDTV. The fact that I can buy children’s movies through iTunes and not have them scratched beyond playability is very much in the plus column.

Movies are great, but it’s TV where AppleTV really shines, in my opinion. Since I took the leap into the HDTV world, I knew it was time to put my Formac Studio out to pasture. I purchased an Elgato EyeTV Hybrid – a USB HD/Analog TV tuner. Plugged into my main Mac, it turns the AppleTV into a full-fledged PVR. Using Elgato’s EyeTV software, I can schedule shows to be recorded in their full HD glory, automatically converted into AppleTV’s native H.264 format, transferred to iTunes and then synced to my AppleTV. Sweet! iTunes can be set up to sync all TV shows or the last few unwatched episodes of a show to save hard drive space.

The AppleTV also allows you to play your iPhoto slideshows in full HD glory. Although it lacks a browser or other method of quickly going through your photos (admittedly not its intended purpose), the slideshows it does – with custom music through your iTunes library – are great. I’ve been told that seeing the beautiful pictures on a great screen with professional transitions makes seeing our vacation pictures almost bearable to the neighbors!

Being a gadget-lover, when I first heard about the Squeezebox – a professional way of getting your iTunes music into your stereo – I jumped at it. Since I bought the AppleTV however, I have unplugged it. The AppleTV interacts perfectly with iTunes playlists. True, with the Squeezebox’s Plasma display, I didn’t need to turn my TV on to listen to my music, but the AppleTV makes listening to music more of a visual experience. As you scroll through albums, artists and tracks, you get an iTunes-like coverflow interface. Apple has both RCA and optical output connectors, so you can hook it up to your TV or a higher-end receiver for better playback fidelity.

These are some of the good points. What about the bad? I would say that for most, the largest stroke against the AppleTV would be the price. For me, the AppleTV made sense, along with the Elgato Hybrid, for watching TV on my schedule. For those with cable and a Tivo-like DVR device, this may be a different story. I find the convenience of having all of my media available to me in one location and with one interface quite worth it. Some may also question the small hard drive as a choice for those with larger libraries. Apple does offer four times the storage (160 GB) for $100.00 more.

Even though Apple releases great products, some people are just never satisfied. Before the ink was dry on many people’s receipts, they had cracked open the cases of their shiny new AppleTV’s and rooted around inside, seeing where the box could be tweaked. One of the first things people did was to swap the internal hard drive for something a bit roomier. Next, people realized that being tied to iTunes for content was a bit limiting in their eyes. Many hacks sprung up to allow the playing of video files that the AppleTV didn’t have the capability to play with the default firmware. People also utilized the “diagnostic” USB port for keyboards, mice and even external storage. Some people have even modified the device to do things I’m sure that Apple didn’t even think of.

In my time with the AppleTV, I have found it to be a device worthy of my time, effort and expense. It fits my needs perfectly, and I believe it has the flexibility to fit many people’s needs as well. As more and more of our time is spent in the digital realm, I believe Steve Jobs’ plan of Apple being the hub of this digital life is becoming more of a reality every day.