Punching Up Screen Grabs With Preview

When creating documentation, one of my more time-consuming tasks used to be punching up screen shots with labels, arrows, highlights and whatever. With its ability to mix vector (scalable text, lines and shapes) and bitmap graphics, Adobe’s Fireworks was my favorite tool, though it bordered on software overkill. Recently, I was in a rush to get something wrapped up and posted on a deadline and was nowhere near a copy of Fireworks. I nosed around a bit and discovered that Apple’s Preview could now do virtually everything I needed.

Preview is ready to help with all your basic screen-grabbing needs. Just launch the program and click on the File menu. You’ll find Take Screen Shot down near the bottom. You’ll have the option to grab the entire screen (something you’ll rarely need to do), a window or a selection. For the latter two options the cursor will transform into a camera icon. Either drag a selection marquis around any part of the screen or, for a window, click on any visible portion of any window or dialog box. Even if it’s partially hidden, Preview will grab the whole window as if it was on top of the others. 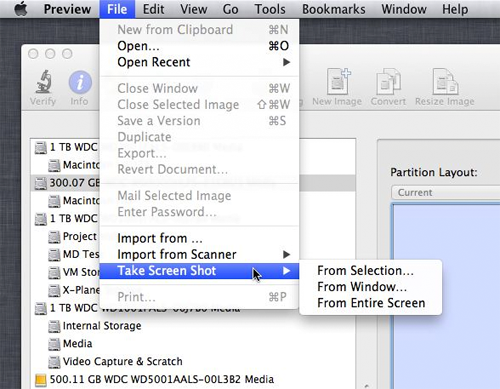 Unfortunately, if you need to capture a features drop-down menus, which requires holding the mouse down, you’ll have to use the timer feature in Apple’s Grab utility.

Once you have a screen grab you like, you’ll need to make some decisions about the layout. Is there enough space in the image for all the labels (usually referred to as “callouts”) that you need. Most commercial graphics programs allow you to expand the canvas size, adding white space around the image after the fact. Though this feature never made it into Preview, there are two workarounds. You could set your Desktop background to be white. (Look for white under the Solid Color options in the Desktop and Screen Saver preferences.) Or just create a new Folder, expand it out to the size you need and grab the white space as a screen shot. Then, simply copy your original screen and paste it into the preview document containing only white space. Be generous. It will be easy to crop the image later.

At this point, it’s a good idea to scale the screen grab down to the size you’re going to want for your final illustration. The reason for this is that the text you add in Preview does not scale up or down very well. The edges tend to get jagged and even some of the proportions become uneven. Even the text you insert after scaling may not look absolutely sharp. I found that using the Fonts window to resize it (even back to the original size) seems to do a good job of clearing it up if this happens. 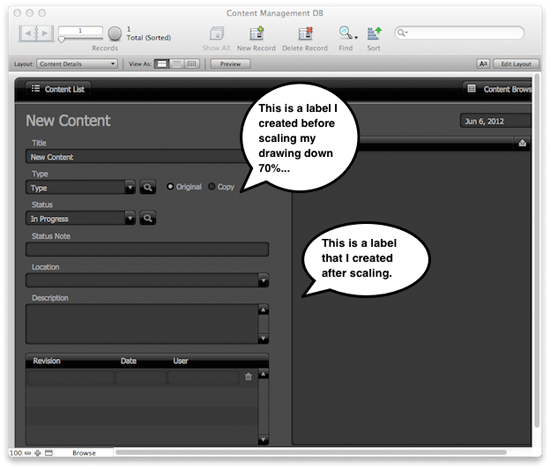 To draw attention to a something on the screen, use the shape tool - a rectangle or oval with no fill - to surround what you want to highlight, as shown below. (If you can’t see the toolbar shown in the screenshot, select Show Annotations Toolbar from the View menu.) I’ve found that a reasonably thick, bright yellow stands out nicely, even if the document is later printed in grayscale. 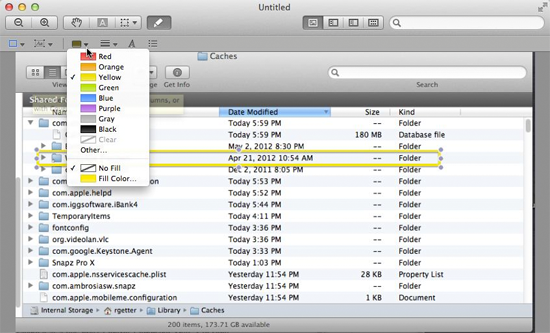 Generally, when you’re calling attention to something in this way, you’ll also want a text label to explain what it is. If I’m working entirely in the screen shot without any surrounding white space I’ll always enclose the label in a shape with a opaque background fill to make sure it stands out. And for this, I prefer the Speech Bubble. (Select Tools → Annotate → Add Speech Bubble.) It’s clear, clean and won’t be confused with any naturally occurring elements. As a bonus, Preview, by default, gives shapes a subtle drop shadow that helps it stand out. 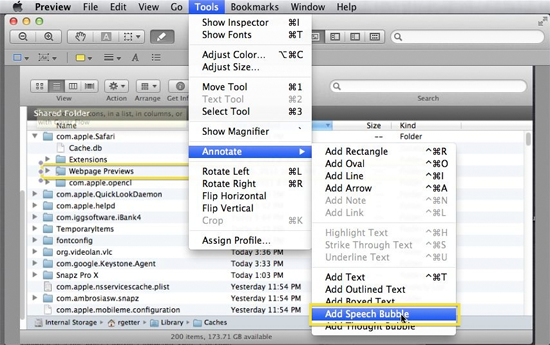 If you’re placing your callout in some surrounding white space you created, the arrow tool in the lines menu will work just fine. In this case, there’s usually no pressing need to put the callout text in a box.

There are Some Limits

One of Preview’s most significant limitations is that it’s unable to maintain discreet layers, which means that your options are rather limited when it comes to going back and making changes. The next time you open your file you’ll discover that all the elements that you added are essentially locked in. With Lion, you are able to step back in time and pull up an earlier version of the document. But if one of the changes you want to make is one of the first elements that you created, you may need to redo a good deal of work. You can copy and paste pieces of earlier versions into the current document. Because Preview uses onion skinning (making the selection partially transparent), it’s not that hard to line up a chunk of your old version with your current document to create an effective patch.

Though it may not be the ultimate app for this particular purpose, Preview has a lot more going for it than you may realize. And sometimes the best tool for a job is the one you happen to have with you.