Dropbox is a popular cloud storage service that magically moves files from one device to another, but it’s probably not the first name that comes to mind when you think of version control. However, as you’ll learn in this tutorial, Dropbox has several powerful features that allow you “undo” any changes you make to files saved in your Dropbox folder. This is an absolute necessity for those of us who use Dropbox to store critically important files that can be accidentally modified or deleted.

Why Everyone Should Use Dropbox

First, let’s talk about Dropbox and why you should use it. This should go without saying, but in a world where people spend days or even weeks working on digital projects, data loss is simply not an option. You can’t afford to lose days of work. But if you’re still saving files to your Mac’s hard drive, you’re leaving the storage of your documents to chance.

If you aren’t using Dropbox or a service like it, you should [create a free Dropbox account]http://www.dropbox.com) and start using it immediately. After you’ve installed Dropbox on your computer, you can use it to store your most important files. Dropbox will automatically store the files on your Mac’s hard drive and the Dropbox cloud servers.

It’s the ultimate backup. If Dropbox’s servers failed, you would still have the files on your Mac’s hard drive. And if your Mac is stolen or its hard drive crashes, the files will still be stored on Dropbox’s servers. For your own sake, I hope you agree that using Dropbox is a no-brainer!

To help you visualize how version control could work in the real world, we’ll use the example of a teenager writing an essay for his high school English class. When the student opens a new document and saves it to a Dropbox account, he creates the first version of the file. As our diligent student writes paragraphs and adds images, he saves the document periodically to protect his work. Every subsequent save creates a different version of the document in Dropbox. In fact, you could think of the different versions of the same file as different files completely. Dropbox is effectively creating a paper trail of the student’s progress.

Back to the high school student. When he walks away from the computer to make himself a snack, his sister deletes the essay, saves the file, and closes the word processing application. The essay is gone. Or is it?

Panicked, the student logs in to the Dropbox websites and discovers that he can recover a previous version of the file. Dropbox has saved the day! This is just one possible application of version control.

There are two types of versioning available for your Dropbox account. The free version is automatically enabled for every Dropbox account, and it keeps track of all of the changes you make for 30 days. The Packrat version keeps track of every change you ever make to the files in your Dropbox. It requires a Dropbox Pro plan and costs $39 per year. If you’re the cautious type or just ultra paranoid, you’ll definitely want to subscribe to Packrat.

You don’t need to do anything to enable the free versioning feature. It’s enabled by default! If you’d like to subscribe to Packrat, here’s how:

When you accidentally trash files stored on your Mac’s hard drive, those files are gone for good. (Of course, you can restore them if you have Time Machine backups, but it’s a pain.) Dropbox makes it easy to restore any file that you delete from your Dropbox folder. Here’s how to restore files that you have deleted from Dropbox:

Congratulations! You have restored the deleted file to your Dropbox. Repeat the process for any other deleted files that you want to restore.

Restoring a Previous Version of a File

If you inadvertently save a file or overwrite an existing file with a new one, you can use Dropbox to recover the previous version of the file. Here’s how to do it:

You have successfully restored the older version of the file to your Dropbox.

Comparing Two Versions of a File

Here’s how to compare two versions of a file in your Dropbox: 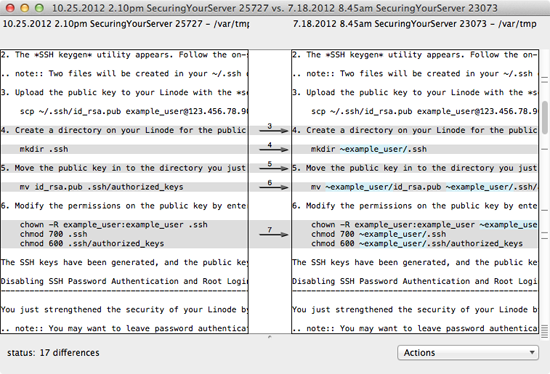 Once you determine which version of the file you want to restore, you can restore it to your Dropbox using the instructions in the previous section.