Dreams are the royal road to the unconscious, said Freud famously, and he set us off on that road in the scientific quest for dream understanding. Dream analysis can be a very helpful tool to serious psychoanalysts. Downscale, we have the dream interpreters in the daily papers. Often those interpretations confirms our hopes and wishes—our dreams—for love or money. Not much different from the astrology columns, really.

But first I must make peace with the Long-Suffering Diana. She maintains that her anxiety dream, which is set in her second grade classroom, is every bit as valid as mine, which is in some undergraduate student setting. And it is. I did not mean to suggest that her anxiety dreams take a backseat to mine. To my way of thinking, as long as the dream seems to reflect our feelings of inadequacy, of not being good enough, of not being up to a task, that’s a valid anxiety dream. Incidentally, I found another anxiety dream on the internet which was almost exactly like son Dan’s. This was a waitress dreaming that she was tripping, was spilling trays, was way behind on serving her tables, that the bartender was screaming at her, and so forth. Whatever floats your boat. Or your dream. It also seems a little murkier than that. I finally did survive my school experiences and went all the way to the Ph.D. I finally beat that system! So my guess is that any later anxiety—how are our kids faring in these tough economic times? Am I being attentive enough as a husband? Will the chairman let me teach my course next semester?—still uses the old undergraduate dream to express itself. One size fits all, as it were.

I don’t have what I would class as real nightmares, not since I left childhood behind. I once had a terrifying experience—I was four or five—when I was sure that a locomotive was after me, and there I was flailing my way through snow up past my knees and knowing that the big black locomotive was gaining on me. But that was in real waking life! Perhaps that shows how close little kids are to the terrors of dreams. Who needs nightmares when you can make up your own in bright daylight.

What I have now—and what I suspect most normal adults have—is what I’ll call “nightmare lite.” I do have unpleasant dreams, or unpleasant features in dreams, but they are not really terrifying. Even the acrophobia that I mentioned last week I can handle (I always manage to scoot back from the edge). Another thing I remembered, and which seems to be common, is to have someone threaten you or bully you in a dream. You know you ought to defend yourself, but two things may happen. You may be so completely cowed that you don’t fight back at all and have to live with the shame, or you do try to fight back, but it seems as if your arms are flailing through molasses and your punches land harmlessly And if you try to run away, you are running in slow motion through that molasses and getting nowhere. (How eerie that my real life struggle in the snow, when I thought that New Haven Railroad locomotive was after me, captured that same condition.)

By the way, the “mare” in “nightmare” does not refer to a female horse Rather, as my Shorter OED tells me, “nightmare” refers to “a female monster supposed to settle upon people and animals in their sleep, producing a feeling of suffocation.” “Mare,” a very old word, is itself an incubus (a male demon) or succubus (a female demon). Scary stuff, for sure. 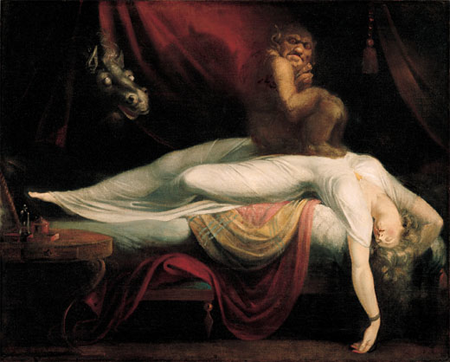 Many artists have tried to paint nightmares. Picasso’s Guernica has the look of a nightmare, a bitter metaphor for the bombing of that Basque town in 1937. Surrealists like Dali also come to mind. But the man famous for his nightmare paintings—and famous, really, for those alone—was a Swiss (1741-1825) who was born Johann Heinrich Fussli, later changed his name to (John) Henry Fuseli, and spent most of his life in England. He was a pre-romantic, a flamboyant character who saw William Blake, the poet and mystic, as his soulmate. Here are two versions of the painting, the first circa 1782, the second from 1790/91. It is the second that I was shown in an art history course and that has stayed in my mind to this day. Did Fuseli assume that “mare” meant female horse? I don’t know, but the most striking feature for me has always been that horse with the preternaturally luminous eyes that is looking on. Is it frightened? Fascinated? Is it a conspirator in the dream? And there you see the “mare,” surely an incubus in this case, sitting on that curvaceous woman’s chest and grinning evilly (incubi were rumored to have sexual intercourse with sleeping women). 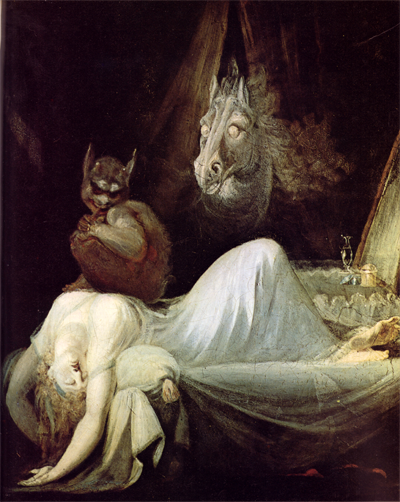 Sweet dreams, one and all.