I don’t mean with the Longsuffering Diana, although that is certainly true and forever will be. And our kids and grandkids are so rooted in my heart as never to be extirpated. But I find myself in love with 23 pounds of canine named Roadie. Never thought we’d have a dog again, and I have a good story for you.

A little over a year ago I’m following my son-in-law in a two-car caravan on a miserable morning, overcast, drizzly, and cold, when I see this little dog worrying some roadkill right in the middle of the highway. Then Drew hauls to a stop and his mother—who had screamed, “Stop this car! We’re getting that dog!”—jumps out and snatches up the woebegone urchin. He had no microchip and no collar and nobody answered the ad we placed in the local papers. Later, on our drive back to Albuquerque, I ventured that of the kids and the two sets of in-laws, only we were dogless. Did Diana think that maybe…?

And that’s how we named Roadie and that’s how we wound up with Roadie. At the vet, I said that he seemed to have some cocker spaniel in him. “He’s a purebred cocker,” said Dr. Lawler. (Then, always the kidder, she said, “You stole him, didn’t you!” and laughed her raucous laugh.) 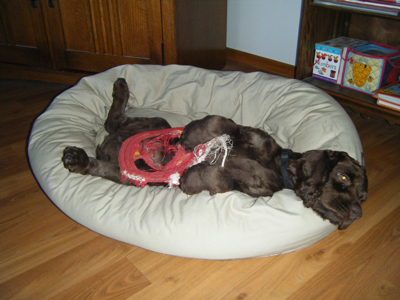 We’ve always had cats, and we had a dog that grew up with the kids. Moxie the Wonderdog was a female of indeterminate breed and fierce loyalty. I remember her first night, when we made a bed in the back bathroom and beside it set an old wind-up alarm clock because we had heard that the ticking was a comfort to puppies taken from their mamas. Such a tiny thing she was, and would grow to weigh not much more than the cats. (I think she topped out at 14 pounds.) And I remember taking her, blind, deaf, and in pain, to the vet many years later to be put out of her misery. Hell of a little dog was Mox. If she thought the kids were in danger, she’d have taken on a grizzly. I’m convinced of that. Requiescat in pace, Moxie Shea.

Cats are less trouble, most of the time, than dogs. We could leave ours for long weekends with just water and kibble, and they were affectionate when they wanted to be and could be counted on not to chew things up. Chup, whom we still have, even worked up a creditable canine impersonation, trotting along with me when I went up the mailbox and trotting back to watch as I sorted out the junk mail. When he is hungry, he butts me with his head and nips me, trying to start something. He licks my head to wake me up in the morning (yes, that hurts!). The other one, the Maine coon, yammers all day long, but I have yet to have the neighbors complain about a barking cat. So I was—and certainly Diana was—content to live out my days doglessly. Then came Roadie.

We housebroke him very quickly, a concept that Mox never completely grasped.* We enrolled him in obedience school twice, with some success. But Roadie is such a laid back little guy that, for example, when they tried to teach him to sit, he’d already be sitting, and when they tried to teach him to lie down, he’d already be lying down. Sometimes he would be so self-contained and removed—while puppies bounded maniacally all around him—that I said he was a new breed, an Irish Bystander.

But when he is excited, when I have just let him out of his crate in the morning, his wagging stub of a tail will generate such torque that his body will form an impassioned parenthesis as he scuttles toward me. But all the while his little face will have that solemn, lost-my-best-friend cast that cockers always have. What a hoot.

He is my bosque buddy and a member of the Sons of Ditches Canine Auxiliary. The SoDs took a long run this morning and right now Roadie has found a patch of sunshine on the living room carpet and is totally zonked out.

Just an (old) boy and his dog. Ah, Roadie Shea, I am putty in your paws.

*I bear responsibility for Mox’s not getting fully trained, because I turned the job over to Diana, who likes to say that she was supposed to potty train our daughter and our dog at the same time, and she couldn’t manage both.