Having a friend in L.A., another in South Laguna, and a son in San Diego, I have over the years become a real aficionado of Southern California.

I know that SoCal is an easy target for critics: ticky-tacky sprawl, the kingdom of the mall, developers on a roll, freeways out of control (you see that it even inspires its own doggerel). But that is only half of it. There is solitude and spectacle abounding. And the roads—oh, the off-the-interstate roads! Well, we’ll get to those.

“Roads” implies driving, which is really the only way to enjoy SoCal and the getting there. So I invite you on a trip, from Albuquerque, NM, to South Laguna, CA, where my friend Cosgrove’s house clings to the hillside and overlooks the blue Pacific. We’ll take a civilized two days. Being in no hurry, we’ll take detours on the map and in the mind as the mood strikes us. If you have your road atlas handy, so much the better.

Ah. Let me introduce you to the Little Red Beast, a ’99 Mazda MX-5 Miata (the first of the so-called “M 2,” the second generation) with orthodox headlights and—as you would see were the top up—a glass back window (take that, BMW!). A 1.8 liter double- overhead-cam 4 that puts out 142 horsepower. Stick shift, of course, 5-speed. Not a Corvette, certainly, but when we eventually drop down from a mile high to sea level, you are going to think it’s supercharged. Which, in a way, it will be. The odometer reads about 126,000 miles and the engine is still tight as a drumhead. We will be traveling in style, and I might even let you take the wheel now and again. We’ll see. 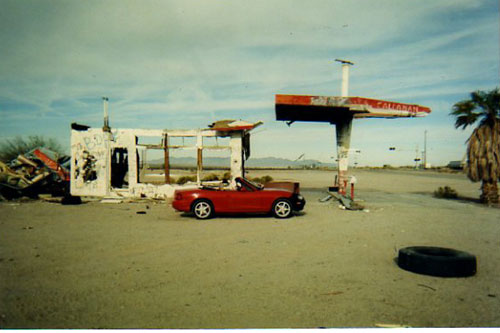 I first made this trip in September of 2000, and I decided, as many do, to try to spend as much time on fabled Route 66 as possible. (After all, I wanted to get my kicks.) But for most of the way, with two exceptions that we will get to, Interstate 40 is built on top of the old roadbed. Rte. 66 is not just dead, but buried. After Central Avenue in Albuquerque, you can pick up old 66 in Grants, where it is a lackluster frontage road. In fact, you can take that piece almost all the way to Gallup, near the Arizona line. The other remnants of old 66 are the “Business Route 40” sections through towns along the way. I take those. Interstate highways, for one thing, are made for the destination, not the journey. If I could avoid the interstates I certainly would. Unfortunately, in the West you often literally “can’t get there from here” without miles and miles of 80 mph, blazing white concrete.

So I always go through the towns. And stop, stretch my legs, top up the tank, get a coffee refill (often free if you have your own mug). Grants, Thoreau (pronounced “threw”), Gallup, on the edge of Indian country. (By the way, we crossed the continental divide just past Thoreau, but it’s easy to miss down here in New Mexico.) And on into Arizona. Holbrook. If I were in a hurry to see Dan Shea, down in San Diego, I would drop down here to the Mogollon Rim, Payson, Phoenix, Gila Bend, Yuma… But instead we are going on to Winslow (yes, there are bronze statues of those guys standing on the corner, from the old Eagles song) and into Flagstaff, jumping off point for the Grand Canyon. You know you are making the climb to “Flag” because the sand and scrub begin to give way to evergreens at around 6500 feet. Northern Arizona University is in Flagstaff, and I’m told there is good skiing in the San Francisco Mountains. Humphries Peak, at 12,663 feet, is the highest point in the state. Arizona is a lot more than just Phoenix, a fact that should be vigorously applauded. On the other side of Flag, somewhere between Willams and Ash Fork, we are out of the mountains, back to the high desert.

I mentioned that there were still two decent stretches of old 66, and they are both in western Arizona. The first makes a big swing north from just east of Seligman, goes through Peach Springs on the Hualapai Indian Reservation, and drops back down into Kingman. The map will indicate that is a very scenic route. It is, and we will take it again today since I owe you the whole experience. I took it just once, in 2000, because as soon as I left I-40 I was nabbed in a Seligman speed trap and that soured the rest of the experience for me.

That was the first and only time that I drove Max Metro to SoCal, and I can still see him sitting, humiliated, the cop grinning down at him with radar gun in hand. Max was one of those Geo Metro convertibles of the early ‘90’s—for the record, a 1991, the first year—and a stout and faithful little car. Many people would describe him as “dinky,” or worse, but he had an indestructible 3 cylinder engine and a 5-speed stick. Never gave me a lick of worry or doubt. He was repainted (blazing yellow) and reupholstered, ready for the next decade and the next 100k when, a year later, someone ran a red light and…sic transit gloria Metro. 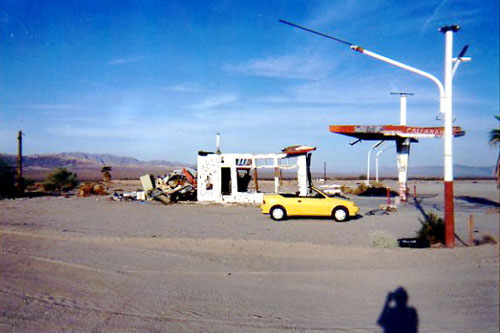 I’m sorry. Just give me a moment, could you?

Kingman. Just a little over halfway, and where we will pack it in for the night. I used to go on down to Parker, but often you wind up driving the last hours in the dark and missing some good scenery. Kingman is known for its railroad traffic and for its favorite son, who was of course…?*

I know a Motel 6 that will be sufficient to our purposes (remember: it’s the journey, not the destination). I’ll be setting the clock for about 5:30. There’s coffee in the lobby and I know a good café in Parker for breakfast.

Between here and there is the most rugged—indeed, hair-raising—stretch of old 66 that I know of. G’night.

*That’s right! Andy Divine, the squeaky-voiced perennial sidekick in all those Westerns. There is an Andy Divine Museum, and that Motel 6 is on Andy Divine Boulevard. There’s probably more.