When I won the eBay auction for my PowerMac G4, I was thrilled to discover that my “new” Mac came with an AirPort card. For those who don’t know, an AirPort card allows you to wirelessly connect to the Internet and other networks. Since my PC downstairs was already connected to the Internet through an ISP, all I had to do to get wireless Internet access was purchase a wireless router for the downstairs computer, and I was on my way! The new PowerMac G4 settled in upstairs and surfed the web wirelessly.

But after a while, I noticed that the wireless signal strength would be strong periodically, and not as strong at other times. Like old-school televisions built for tuning into network TV, wireless cards such as the Apple AirPort card have an antenna for reception. Inside the plastic case and outside the chassis of the G4, the antenna was wired throughout. I purchased an external antenna that was supposed to boost the reception a bit, but after disconnecting the original antenna and hooking up the new one, I didn’t notice better reception or faster speed. 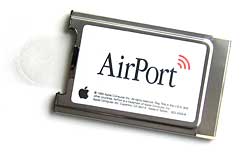 The original Apple AirPort card is an 802.11b device which can attain speeds of a maximum of 6.5 Megabits per second, which comes out to 0.8 Megabytes per second. Having already been spoiled with wireless technology, I wanted something faster. After looking around, I noticed that Apple had released an AirPort Extreme card with an 802.11g class, which comes out to 25 Mbits per second or a little over 3 MB per second. Unfortunately, this particular card didn’t work with older Macs like my PowerMac G4. I searched on eBay and found options for an 802.11g card, but the prices were too high for what I was willing to pay, especially since I worked near an Office Max and saw PC 802.11g cards going for as little as $35.

I started doing my homework by searching Xlr8YourMac.com. No other website has as much information for squeezing every ounce of power from your Mac. (They even have a complete database of hardware tests!) I learned that certain cards were manufactured with a certain chipset - or chips made by specific manufacturers - that worked well with Macs. Reading further, I discovered a handful of wireless cards that were not advertised as being Mac-compatible, but were truly plug-and-play for both Macs and PCs alike. After reading some reviews of a Motorola card, I settled for the WPCI810G. What I liked about it was the more common antenna jack that fit an oversized antenna that came with the card. It was also a PCI card that fit in a PCI slot, and not a card that fit in the AirPort card slot. It was back to eBay! I managed to pick it up for a measly $25 brand new. Later on, when I acquired another G4 from my workplace, I bought another WPCI810G on eBay for $10 new!

Not as pretty as the AirPort card, perhaps. But it packs a powerful punch all the same!

Once I received it, installation was as simple as turning the Mac off, taking out the old Airport card, putting in the Motorola card in an empty PCI slot, screwing in the antenna, and rebooting the Mac. It was truly plug-and-play as the Mac recognized it instantly, and further search on the Apple Profiler showed that the Mac recognized it as an Apple Extreme card. No rebooting and no drivers needed, and remember: there was no indication on the box itself that it worked with Macs. Now I had 802.11G speeds for a small price, and afterwards I was able to sell my old Airport card on eBay for an ending bid of $68.

Keep in mind that not all PCI cards optimized for faster networking speeds can be used in certain Macs, particularly older iMacs or laptops. But there are alternatives. You can purchase third-party 802.11g cards for laptops or 802.11g boxes that connect to your USB port, but these can sometimes cost as much as an Airport extreme card. With the advent of 802.11n cards which allow faster networking than 802.11g cards, the price of these items should come down eventually.

So, if you’re looking for faster wireless speeds for your slightly older Mac, but don’t want to pay premium prices for it, try alternatives to Apple’s cards. It’s a win-win situation. Even if you have an existing Apple Extreme card, you can sell it on eBay and pick up an 802.11g PCI card for less. It pays to do your homework!