How to Make a Bash Script Executable on a Mac

Bash scripts are files containing code that tell your computer to do something. They’re a staple of the Linux world, and there are thousands of them freely available on the internet. With a bit of tweaking, you can use these scripts on your Mac, too. In this tutorial, you’ll learn how to make a bash script executable on a Mac.

Here’s how to make a bash script executable on a Mac:

Depending on how you created the bash script, you might need to change the default application that opens it. Select the file in the Finder, and then select Get Info from the File menu. In the Open with section, make sure there’s a Terminal application selected, as shown below. 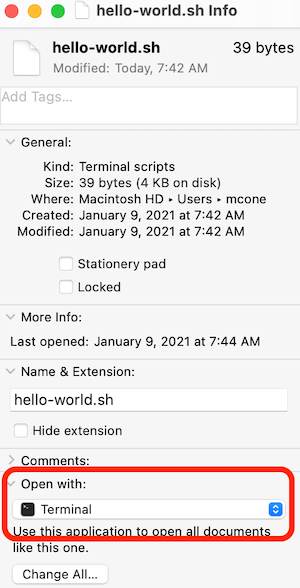 Running a Bash Script on a Mac

Now you can run your bash script! To start it, simply double click it in the Finder. Or, in a Terminal application, run the following command:

That’s all there is to it!