Descanso, in case the Spanish term is new to you, means “resting place.” In practical application, it refers to the embellished roadside crosses—shrines, in effect—erected where people have been killed in traffic accidents. One is tempted to say—and some would say it with angry conviction—that New Mexico is littered with descansos. Far from considering them litter, I think this practice of erecting descansos and of the state’s winking at their existence—other states forbid them and aggressively tear them down—says good things about us Nuevo Mexicanos.

How can we say “resting place” when clearly no one is buried there? The answer bespeaks the long history of this placing of crosses, the traditional Christian grave marker. Centuries ago, travel was a dangerous enterprise, though for different reasons than it is today: one could die of thirst or exposure, one could be killed by raiding parties or bandits. In those cases, the deceased actually were buried where they fell, by the side of the road. Those very early crosses, often erected with protective cairns, actually did mark graves. One of our largest cities, Las Cruces, was named for the many crosses that were found there, a result of some wholesale slaughter. Later, this sense of a resting place came to mean a temporary resting place. Often the graveyard was a considerable distance from the church. Because the pallbearers could not shoulder the heavy coffin for a mile or more, places were designated where they could set their burden down and recoup their strength. These descansos were made holy ground by the simple expedient of piling stones and erecting crosses on the spot. Thus was the departed spiritually protected en route from the consecrated ground of the church to the consecrated ground of the graveyard. This sense of the liminal, of protecting the soul of the departed as it sets off on its journey to eternity, is still reflected in the roadside descansos. To be buried in hallowed ground is to be safe from witches and demons, but the spot where one first met one’s violent death should be hallowed, too: take no chances with the departed’s eternal soul during this perilous crossing over. 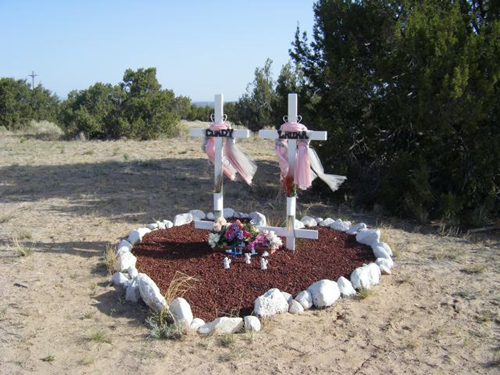 Although things similar to descansos can be found worldwide or at least in the Western world (correspondents from eastern Germany, Greece, and England confirm this), the tradition I am talking about came from Spain and spread through the Americas wherever the Spanish influence did. A friend reports that the road from the La Paz airport into the city, in Bolivia, is a veritable rosary of descansos (a testament to both deadly driving habits and spiritual solicitude). It has moved into the anglo culture, too. I know of two descansos in my suburban neighborhood, one marking the spot where a lad was killed while crossing the street on his bicycle, the other a spot where three high school seniors were done in by high spirits, high speed, and a tricky curve in the boulevard.

Some are more permanent, better maintained, than others; some are more elaborate than others. The cross is essential. It can be made of wood, wrought iron, even rebar. The name of the deceased will be there, often carved on the cross, and plastic flowers are the most common adornment. Some have photos, some a statue of the Virgin or a generic angel. The cairn often has become a ring, a border, of stones. Sometimes the stones are painted. One finds convivial liquor bottles sometimes (we are not big on irony out here…or perhaps we are). Sometimes simple toys. Sometimes pinwheels! And more and more I am seeing teddy bears. The teddy bear is fast becoming Death’s familiar. So many of the dead are teenagers, the half-grown felled by the awful incaution of youth.

Not everyone, as I said, is a fan of descansos. Some crusade (yes, that’s a pun) vigorously against them. Some see them as a visual distraction (more so than billboards?), some have separation of church and state issues (Montana does not allow descansos, but the state does put up very bland but unmistakeable crosses at fatality sites—probably not the first instance of Montana’s not getting the memo…or tearing it up). Maine, years ago, put up crosses. E.B. White writes somewhere that driving in Maine had “become a solemn experience, when one thinks mostly about death.”

I can only counter that when I see a descanso—there are more than a half dozen on the 150 miles of US 550 that we often drive between Albuquerque and Farmington—I do think of death, certainly, and I offer an unspoken prayer for the departed and for those who love and miss them. But what lingers with me as the miles click by at 75 is the touching and lingering love that those makeshifts—some pristine and elaborate, some simple; some new, some old and weathered—attest to.