Indiana Shea and the Ruta Maya

I am beginning this wonk in longhand, sitting by the pool at the Palma Real condominiums south of Puerto Morelos, Quintana Roo, Mexico. A stiff ocean breeze is making those royal palms sway, but it is not unpleasant. Dear me no, it is not unpleasant at all. Just past the pool and the palapas,* the Caribbean laps sand which, more than anything, resembles powdered sugar. The condo’s statue of Neptune, in fetching premature verdigris, presides over the scene, hailing passing ships. When one awakens in the small hours, one hears the gentle susurration of the surf and, smiling, drifts back to sleep. 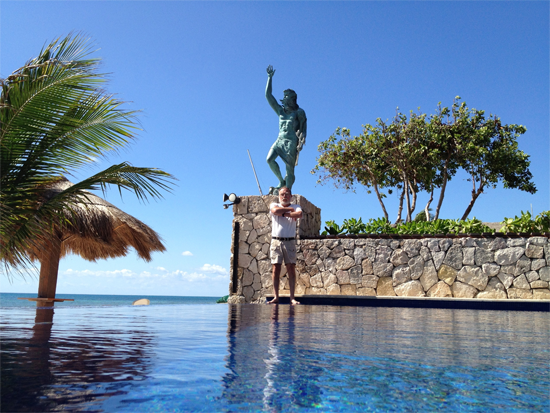 A week past seventy but life is still worth living and adventures worth pursuing. We are here in the Yucatan with our old friends Joe and Barb, who have been here before and are taking wonderful care of us (finding the condo, renting the car, explaining the money). This stretch of Caribbean coast from Cancun down to Belize is called the Riviera Maya, and a good four-lane highway, Mexico 307, runs from Cancun to Tulum, about halfway down. The Riviera Maya is part hope and part marketing. Forty years ago, Cancun (“Nest of Snakes” in Mayan!) was just a gleam in a tourism director’s eye. But only a fool could have failed to see the possibilities—blue-green waters and white sand beaches, the world’s second longest coral reef, a winter climate to rival anything in the tropics…and Mayan ruins! So Cancun was born in a building frenzy, and the Riviera Maya followed. Now as you drive down 307 you see monstrous, grandiose entrances for one hotel/spa/golf course after another. These entrances don’t entrance, alas, and I think the Maya would disavow any architectural influences. But some places are still authentic, and Puerto Morelos is one. (Akumal, I’ve heard, is another, Mahahual a third.)

Not counting the (very) odd afternoon in Juarez, I’ve been to Mexico three times. The first destination was Mazatlan, a glitzy tourist spot even 50 years ago and a sizeable town. The second time, the Sheas went to Kino Bay, a tiny fishing village on the Gulf of California. Puerto Morelos I call the Goldilocks destination: not too Mazatlan (not at all Mazatlan, in fact) and not so primitive and isolated as Kino. It’s just right. The brochure says it has a population of ten thousand, but I would have guessed half that. And it is, for the precious time being, unpretentious and real. Real as in broken sidewalks where there are sidewalks at all. Real as in buildings that never knew a building code, and all in pastel greens and pinks and blues. Real as in a plaza that appears to be a continual work in progress. Did I mention hole-in-the-wall restaurants with great food? I witnessed two processions this week. There they were, a bunch of little kids toting banners, shepherded by a couple of grown-ups (teachers?) and, bringing up the rear both times, the same four superannuated musicians playing a sax, a trumpet, and two improvised drums. Round the plaza they went, celebrating or commemorating Lord knows what.

Mangrove swamps and cenotes: Quintana Roo is riddled with them. The swamps you want to steer clear of, lest you become a snack for a crocodile. Cenotes are water-filled limestone sink holes. We visited two. The second was ok, with fish nibbling my toes, which gets old, but the first was underground and we had it almost to ourselves. You take wooden stairs down about thirty feet and around a corner, and there you are in a cave—stalactites, the whole bit— paddling around in crystal clear water. I could certainly do that again.

But I came really for just one overarching purpose: to visit a Mayan ruin while I still can. And we did. Two places, in fact. Tulum was one, and interesting (look but don’t touch, like Chichen Itza nowadays). But for me it paled beside Coba, about 40 kilometers inland. The thing about Coba is that it is still in the jungle. Only about ten percent of it has been excavated. Think about that. Ninety percent of this huge site is still smothered by trees and vines. The guess is that Coba was an outpost, an off-shoot, of Tikal, the famous site in Guatemala. There is evidence of trade and royal intermarriage. 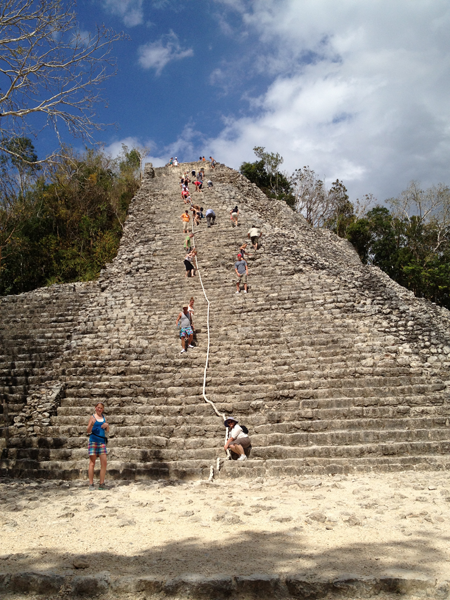 The star attraction at Coba is Nohoch Mul, the second highest Mayan pyramid in the Yucatan. You glimpse it through the trees, round a corner in the trail, and there it is and it takes your breath away. It’s almost a hundred and forty feet high.

Well of course I climbed it. We tourists swarmed up like ants. It’s a little scary and a workout and I wish now that I had counted the steps. But from the top (the summit?), standing beside a kind of sacred penthouse, you gaze out over jungle for miles in all directions. You take a deep, calming breath. You grin foolishly. Wow. Double wow.

Indiana Shea! I could hear the iguanas singing, each to each. And I know that they were singing for me.

*A palapa is one of those big permanent “beach umbrellas” with a thatched roof. There is no decent English equivalent that I know of. Handy word.