Quite often there is something new at the stump in the bosque. Last week it was that rosary; on tomorrow’s run I’ll probably find something else. About a month ago, I found this note, protected from the elements with plastic:

Letter to the Cross Remover

This is not to admonish you or threaten you, but to inform you that your act is one of the most reprehensible inhumane actions others have done for centuries and, regrettably, still do. You did what some Spanish settlers did when they came upon a Kachina.

To my Trail/Stump Comrades: I’ll replace the cross with one more difficult to remove, and I’ll say a prayer for you and yours in Church on Easter. [By the way, for full disclosure, I have not been to church for ten years, am not a “religious” person, and have limited my prayer places to our stump, where I feel spiritual healing.] Amor Love/Esqh, GP*

Well. Now I knew a little bit about the history of the stump, and I knew that it had a fierce guardian. I trotted on in a brown study. I knew that the little stump was nothing if not ecumenical. We had the crosses and New Testament verses, the mezuzah, the smudge sticks and dream catchers, and the Buddhist prayer flags. I wondered why we hadn’t heard from the Druids, though a Druid could claim the stump itself, I suppose. But here was discord in Paradise. A Christian squaring off against a putative atheist, by the look of it. Rodney King’s plaintive words came to me: Can’t we all just get along? A couple of weeks later the letter was gone and an appropriately rude cross—two bosque sticks wired together—was in its place. More mystery, but something—peace, I hope—had been restored. 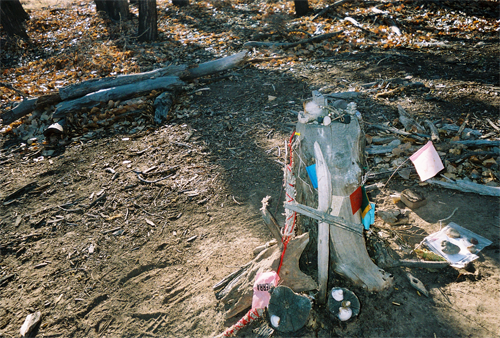 About two weeks ago now, I was nearing the stump at a trot and saw two men chatting there. I stopped, bade them good morning, and made some remark about the stump. I wound up talking for at least twenty minutes to George Peknik, the guardian of the stump and writer of the letter. He is an interesting—no, a remarkable—man.

The first thing one notices about George—although his speech is clear enough—is the twist to his mouth, typical evidence of nerve damage, and the story was not long in coming. About three years ago, when the Pekniks lived up in Colorado, George went out in the yard to clean up after a windstorm. As he stood under the three big cottonwoods in his front yard, a microburst occurred and “ a half ton of limbs and branches from high in two trees fell on my head and shoulders.”

An event like that is either life-ending or life-changing. George was lucky. He spent weeks in a coma and months in recuperation. He became ambivalent about trees, especially cottonwoods, the defining tree of the bosque, and who can blame him? But about six months ago he and his wife moved to Albuquerque, where their son and grandsons live, to a place right on the edge of the bosque. He could no longer afford the ambivalence. He became a Trail Watch Volunteer and a denizen of the bosque. He became a mystic, a poet, a philosopher. He became the Druid that I had been musing about! In his writings—yes, George is a writer, too—he refers to his “rewired brain and reinvigorated heart.” A decent man before the accident, be became an even more spiritual and caring man after it.

There is a special part of the bosque that George has dubbed Pandora, after the forest planet in Avatar. It is easy to see—literally—why. The bosque has been cleared of underbrush to lessen the fire danger and those cottonwoods seem to writhe and dance before your eyes. To say they are living would be understatement. The stump is the epicenter of Pandora. And I think George’s pique at whoever removed the cross was more spiritual than narrowly religious: when people leave things on the stump, they are meant to stay there. No one gets to edit the stump! Oh, and I was wrong about the stump’s being the Bank of the Bosque. A fellow whose old dog is in bad shape collects whatever money is left on the stump once a week, adds to it, and gives it to the Animal Humane Society.

The origin of the stump is a bit of a mystery. Some people say that a forest worker first put a cross on the stump five or six years ago to honor a (fallen?) friend and that act inspired others to add their own offerings, their own mementoes. I guess we’ll never really know. And that’s as it should be.

*“Esqh” means “love” in Farsi. George and his wife spent many years in the Middle East.