Water in the Ditch

Spring has come to my town; she is coy for the moment but will soon be sashaying. The flowering trees are busy in white and pink. The elms are bristling with catkins. The crocuses are up. There is even furtive budding on my big mulberry and of course the globe willows are leafed out already. I greet even the dandelions with cheer. By late morning these days it is top down weather and the Little Red Beast and I are making the most of it.

Have I told you about the ditches, the acequias, in Albuquerque? The Sons of Ditches do a lot of running on the horse trails in the Rio Grande bosque, but the bosque trails are just a small part of what we have. Water is the life blood of the West and the Rio Grande, though diminished from its former glory, is still a main artery. Thus, for centuries there have been irrigation ditches leeching out from it, catching every drop of water. Groceries now get trucked in from all over, of course, but the North and South Valleys are still to an extent Albuquerque’s bread basket. There are now literally hundreds of miles of waterways—laterals, drains, ditches, wasteways—that take water from the main river canal (the acequia madre, the mother ditch), escort it through the bottomlands, and return anything left over back to the river to be used farther south. The Middle Rio Grande Conservancy District controls the ditch system in four counties (from north to south: Sandoval, Bernalillo—that’s us—Valencia, and Socorro). In March they release the waters and in October they shut things down. In the winter the ditches are dry and can be cleaned for the coming spring.

Some years ago I photocopied the North Valley pages of my city atlas and traced the ditches in blue highlighter. There is the Pueblo Lateral, there the Chamisal Lateral, the Hackman Lateral, the Campbell Ditch, the Gallegos Lateral, the Gallegos Ditch, the Griegos Drain, the Alameda Lateral, and on an on. The past couple of weeks I have been running the Griegos Lateral. I join it just where it crosses over the Griegos Drain as an aquaduct, and I head southeast for four or five miles. There are water gates at intervals and gates for side ditches by which individual subscribers can flood their pastures or truck patches. Where the ditches meet city streets they dive underground and bob up on the other side.

This is a runner’s heaven! The levees are wide and hard, the water is flowing, and the trees are overarching. Some drains are as wide as canals. You can imagine gondoliers! The laterals are smaller, the ditches smaller still. Don’t imagine a tidy rectangular grid, please. These waterways follow the land’s old contours, snaking, twisting, threading through the valley. On the Griegos Lateral there are cottonwoods fifteen, twenty feet around, old giants who have been slurping the water since long before anyone can remember. 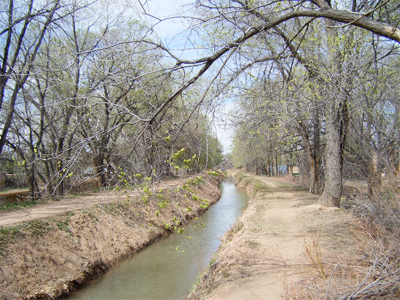 Running the ditches is like riding the train: from the street you see what people want you to see, but from the ditch you see people’s back yards, where their real living gets done. Sometimes a big dog will rush the back fence, scaring the daylights out of you. You’ll see chickens and sheep right here in the city limits. Goats will stare at you in that quizzical way that goats do. You smell water and dust at the same time, the aroma of the earth itself, as you thump along.

You do want to be careful. Where there is water people can drown, so for years the city has been trumpeting to the kids: DITCHES ARE DEADLY—STAY AWAY! Good advice. In a freak accident a few years ago—I remember the descanso, gone now—a young doctor was riding his trail bike alone along the Griegos Lateral, hit a root or rut, was thrown into the ditch and must have struck his head on something. He drowned in a foot of water. The ditches are also the haunt of La Llorona, the Weeping Woman who searches for the children she drowned in the ditch and will gladly grab other children to take their places. But I will take my chances as do so many others, running or just walking. Sometimes you find teenagers canoodling on the ditch bank and trot discreetly past; sometimes you catch a whiff of “mary jane.” No big deal on the ditch.

“Portal” is a fancy word for “doorway” these days, made popular by science fiction writers (“Get back, Jim! That’s a portal into another dimension!” Ooooo!). Well, I gotcher portal right here, fella! The other day, on the morning commute, I was stopped in traffic on Montano just west of 4th. As the traffic fumes clouded round me and somebody’s damned stereo worked its carnage on my eardrums, I glanced to my right and there, between a gas station and a beauty parlor, was the Harwood Lateral, green and canopied with cottonwoods and stretching away to a vanishing point. That’s my portal, friends, a portal into a more peaceful time and a saner world.