How to Run Windows on Your Mac with VMware Fusion

It’s an exciting time to be a Mac user. Everyone knows that we get to use Mac OS X Leopard, the world’s most advanced operating system. And now, if you have an Intel-based Mac and an application called VMware Fusion, you also have the option of using the world’s second and third and fourth best operating systems! Yes, we’re talking about Microsoft Windows, the operating system that the rest of the world has the misfortune privilege of using.

Why would someone want to go and do something like install Windows on their Mac? Good question. We’re guessing that they’ll probably want to use some applications that are unavailable for Mac OS X, like… Internet Explorer? Who knows. Anyway, if you’d like to do the unthinkable and install one of the other operating systems, then follow along.

What is Virtualization, and how does it work?

Before we start, we want to tell you a little about how VMware Fusion works its magic. Here are the main points you need to understand VMware:

As Wikipedia states: “Virtualization is a technique for hiding the physical characteristics of computing resources from the way in which other systems, applications, or end users interact with those resources. This includes making a single physical resource (such as a server, an operating system, an application, or storage device) appear to function as multiple logical resources.”

Virtualization is a popular option for those with high-power computers. In the past, when computers were relatively slow, computer hobbyists would use a technique called Beowulf clustering to connect several computers together to create one supercomputer. Today, with powerful computers such as the Mac Pro, the trend has been away from Beowulf clusters and towards virtualization options such as VMware. (Today’s Mac Pros are so powerful that most individuals have trouble enough utilizing a single Mac Pro’s resources!) Virtualization essentially allows individuals to turn one computer into multiple computers. This technique is particularly useful in IT departments, where many servers can be virtually combined onto one single physical computer.

In this tutorial, we’ll simply show you how to install Windows on your Mac. However, VMware has many other powerful uses with which you can experiment. Don’t stop with installing Windows!

We know that some will be tempted to use VMware to play Windows-based games. Is such a thing possible? VMware’s website states that “VMware Fusion has experimental 3D graphics support allowing you to play select DirectX 9.0 games in Windows XP Service Pack 2 virtual machines.”

It all sounds great, until you actually try to install and play a game with VMware. Your mileage may vary. Our graphics look weird and our mouse doesn’t respond. Sure it’s a bummer, but you can still use Apple’s Boot Camp to install Windows and play games. Unfortunately, installing Boot Camp is another tutorial entirely.

Why Pick VMware Over Parallels?

If you know anything at all about virtualization on the Mac, you may be wondering why we choose VMware Fusion over Parallels, another application that allows you to run Windows on your Mac. The two products appear nearly identical, at least at first glance. 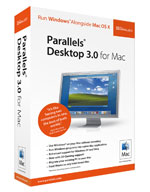 We selected VMware Fusion, because at this time we feel that it’s a more polished application. Fusion provides more features, and VMware provides better support than the competition. And then there’s the experience factor. The guys over at VMware have been in business for years, and they really know their virtualization stuff.

Having said that, you might want to give Parallels a try. The installation process is similar to VMware Fusion, as is the price.

How to Run Windows with VMware Fusion

Before you start, make sure you have some time to allocate to this procedure. It could take you an hour or so to install Windows and set everything up. Here we go!

Warning: Do not stop this installation – VMware Fusion will not work correctly without VMware Tools.

Use Unity to Bring Windows Apps to Your Mac’s Desktop

Now that we have Windows installed on our virtual machine, we can start having fun. VMware Fusion has a great feature called Unity that allows you to run Windows applications right on your Mac’s Desktop. Here’s how to do it:

VMware Fusion does an excellence job of configuring your virtual machine’s settings, but those who need more performance will want to tweak the default settings a bit. Here’s how to do it:

Up the memory as much as you like. However, the more memory you allocate to Windows, the less memory you’ll have to run applications in Mac OS X. And remember that if you’re using a 32-bit version of Windows, you won’t be able to allocate more than 3GB of RAM. See this article for more information.