If you’re a Mac user who owns an Xbox 360, you’re probably hankering to get your computer and game station talking to one another. After all, both of these powerful machines are capable of playing games, music, and video content. Why not share content between your Mac and Xbox 360? If you’re looking for solutions, we have some answers for you. These tips aren’t perfect – there’s still a lot that can be done in the way of developing applications that can facilitate communication between the two devices. (Are you listening software developers?) Nonetheless, these ideas should point you in the right direction.

The first thing you’ll probably want to do is get your music on your Xbox 360. Of course, the simplest way to do this is to pop your CDs into your Xbox and rip them to the Xbox 360 hard drive. However, since you only have 20GBs of space, we’d rather save that for things like new maps and saving games. The second way you can get music onto your Xbox is to connect your iPod. Believe it or not, you can connect it to the 360 using the USB cable that came with your iPod. Go figure, huh? It even shows your iPod’s name in the media section, and you can play all your tunes. 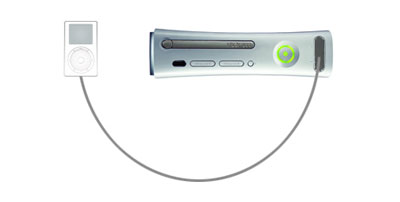 The only other option — and probably the best option at that — is to buy a little application called Connect360 (free to try, and then $20). Just install the application and it will appear in your Mac’s System Preferences.

Just open your System Preferences, select Connect360, and then click the Start button. You’ll be ready to connect! All you have to do is go to the Media Section of your Xbox 360, select Shared Computers, and then look for your computer. It will use your network name, which can be changed under the Xbox’s Sharing Preferences. 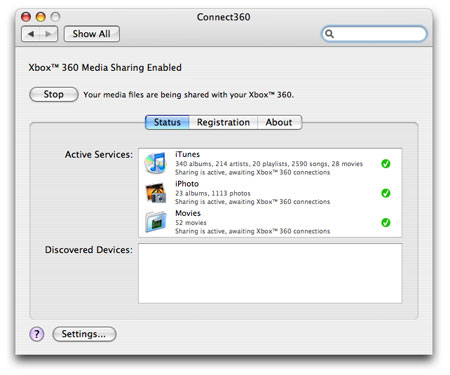 Now you can use your Xbox 360 to view your photos, play your music, and watch your movies – all without transferring them to your Xbox! The content will stream wirelessly from your Mac to your Xbox.

Get the Xbox GamerCard Widget

If you like to play games online, then you’ll like this widget. Xbox GamerCard is a free Dashboard widget that shows your Xbox game card so you can quickly see how you’re doing.

Use Your XBox 360 Controller With Your Mac

How many times have you wished there was a decent controller for the Mac? Well, now you can use your Xbox 360 controller. If you have a USB version, you can just plug it right in and download the Xbox HID Driver for the Mac. It’s freely available at http://xhd.sourceforge.net. If you have the wireless controller, then you can get the Wireless Receiver from Microsoft ($20.00) at http://www.xbox.com/en-US/hardware/x/xbox360wirelessgamingreceiver.