Turn Your Mac Into a Telephone

So, there was this phone thing last week, right? And we weren’t lucky enough to get in on it, even though we really wanted to. The iPhone is just too friggin’ expensive for us. Maybe you’re in the same boat: You can’t quite bring yourself to pay more than $2,000 over a two-year period for a cell phone. Or maybe you live outside of the United States. Or maybe you own an iPhone, but still want to be able to take and receive phone calls on your Mac.

Tip: None of these applications are a substitute for a real telephone. You cannot make emergency phone calls to 911 with any of these services, so don’t disconnect your land line or cell phone just yet.

Some people call it a revolutionary voice-over IP service. We call it an instant messaging client on steroids. In reality, Skype is probably a cross between the two. You can use it to make free Skype-to-Skype computers calls, hold video teleconferences, call any phone in the world, and even chat (in good-old text) with friends online. And, because Skype is owned by eBay, you can sleep well knowing that it’s not a fly-by-night outfit. 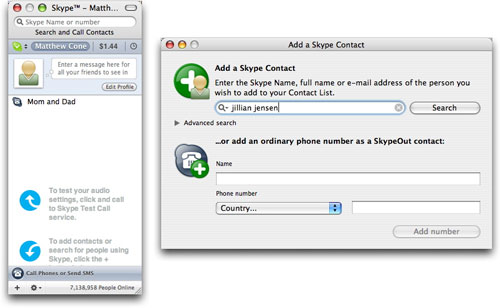 Not everything about Skype is free. You’ll have to pay to call other people’s phones, and you’ll also have to pay for other niceties like voice mail, headsets, and a real phone number that can be used with Skype. But the prices are low, the quality is excellence, and the application is about as Mac-friendly as it gets. We used Skype to call a friend in Kenya last weekend, and the quality was flawless.

If Skype is the Coke of Internet telephone applications, Gizmo is the Pepsi. We’ve got to admit that this application is pretty slick! Like Skype, Gizmo lets you make free computer-to-computer phone calls and acts as an instant messaging client. You have to pay to call friends with phones, but Gizmo’s rates seem to be slightly cheaper than Skype’s. 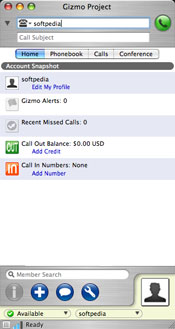 With features like call recording (good for podcasts!) and integrated Google Maps, Gizmo is obviously trying to lure people away from other voice-over IP options. But with no built-in support for video conferences, they might have a tough time!

Surprisingly, iChat is still the best application for talking to other Mac and PC users. You can talk to anyone using iChat or AIM with a microphone (all new Macs come with them built-in). The sound quality is usually pretty good, and the video chat isn’t half-bad either.

You’ll know you can talk to your friends when you see the green telephone next to their usernames. Just click on that phone icon to the start the voice conversation! Unfortunately, there’s no way to use iChat to talk to people on their phones. And there’s no support for iChat on the iPhone, either. Bummer!

This nifty little Dashboard widget allows you to add iPhone voice mail-like functionality to your Mac. After you create a free Callwave account and start forwarding voice mail to Callwave, you’ll be able to access new voice mail messages right on your Mac. And you can listen to the messages in any order, just like you can on the iPhone! 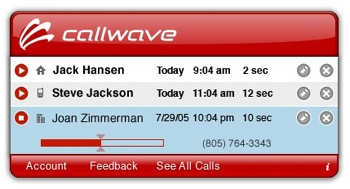 Activation is fast and easy (Callwave works with nearly every cell phone service provider), and you can start using it in a matter of minutes. Coolest feature: Callwave can try to use voice recognition technology to send your voice mail messages to you as text messages. Highly recommended!

Some voice-over IP phone applications, like Skype, have built-in encryption to protect your privacy. Other programs come up short in the security area. iChat and Gizmo don’t encrypt conversations by default, making your conversations accessible to anyone with the proper eavesdropping applications. Fortunately, there’s a free application that can be used to secure your calls: Zfone. 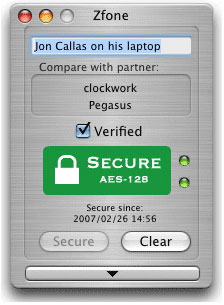 Installation is a breeze, and set up is pretty easy too. The only problem is that your pals have to have Zfone installed on their computers, too. It can sometimes be a pain coordinating that sort of thing, but hey, security is security!